My Life Would Not Be Complete Without Vegetarian Lasagna 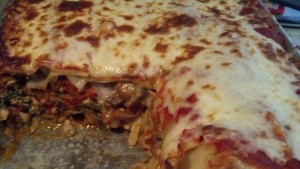 It is a cool fall morning In Wisconsin.  Patches of frost melt into dew on fallen orange maple leaves.  Sunlight captured by the droplets warms the leaf skin in an attempt to reanimate the once lustrous green of the leaf.  The reflection off the many droplets cause the leaves to shimmer in the morning sun.   On this morning I take solace in my warm home.  I am nursing a sore foot.  Plantar Fasciitis was the diagnosis.  I am staying at home for the week and doing the stretches.  But one cannot just sit on the couch all day and stretch ones heal.  So off to the kitchen to whip up some goodies for the week.

I do have an update on my health status.  I am maintaining this diet and the numbers are showing progress.  My Cholesterol is at 168.  My glucose levels have fallen from 110 to 98.  I have dropped 20 lbs.  After two months I feel this is good progress.  I plan to maintain my diet.  I like the emphasis on eating good.  It is good for my body and good for my mental health too.  Yippie for me.

Yesterday I roasted some peppers.  The peppers are brilliant red and ripe; they were the last of the peppers harvested.  I roasted many varieties.  Anaheim, Cherry, Bell, Cubanelle, Habanero, Jalepeno, Serano, Banana, Hungarian.  The roasted peppers have the smokey sweet flavor that I love and use the roasted peppers in a variety recipes.  They are best on the grill but can be roasted in the oven also if you wish.  Cut the peppers in half and deseed them.  Drizzle with olive oil and place on a hot grill.  Cook until the skins are blackened.  Place in a large bowl and cover with plastic wrap.  Let cool.  Later the skins will peel off easily.  I save them for cooking in later recipes.

I was thinking of making Spanakopita today but changed my mind as I had a craving for some pasta.  So I am combining the best of both.

In a saute pan drizzle with olive oil and saute the onions until they start to become translucent,  Add mushrooms eggplant, 1/2 cup red wine and black olives.  Cook until tender.  Set aside.

There is a trick if you would like to save time.  Do not cook the noodles. Layer the lasagna with hard uncooked noodles and add extra red sauce between the layers.  Cook with foil over the top of the pan for one hour.  Remove the foil and add the 8 oz mozzarella cheese to the top of the lasagna and put underneath the broiler until it is bubbly and browning.  After I remove the foil I usually test the lasagna by inserting a knife into the center.  If the noodles are cooked it will insert easily.

I have also added Breaded and fried eggplant medallions to this recipe.  Be careful the breaded eggplant is addicting. I usually eat it before it I can get it into the oven.

My stumbles, triumphs and growth as a study abroad student in Granada, Spain

Personal reflections along the road to Tomorrow's World

sudo'd - Projects, tutorials, and graphics by your average computer geek

keeping in touch, one bad photobooth picture at a time

It's the effort, not the pace.

This blog rumor news refers to the daily and trending topics on the net.

My life through the lens of a camera